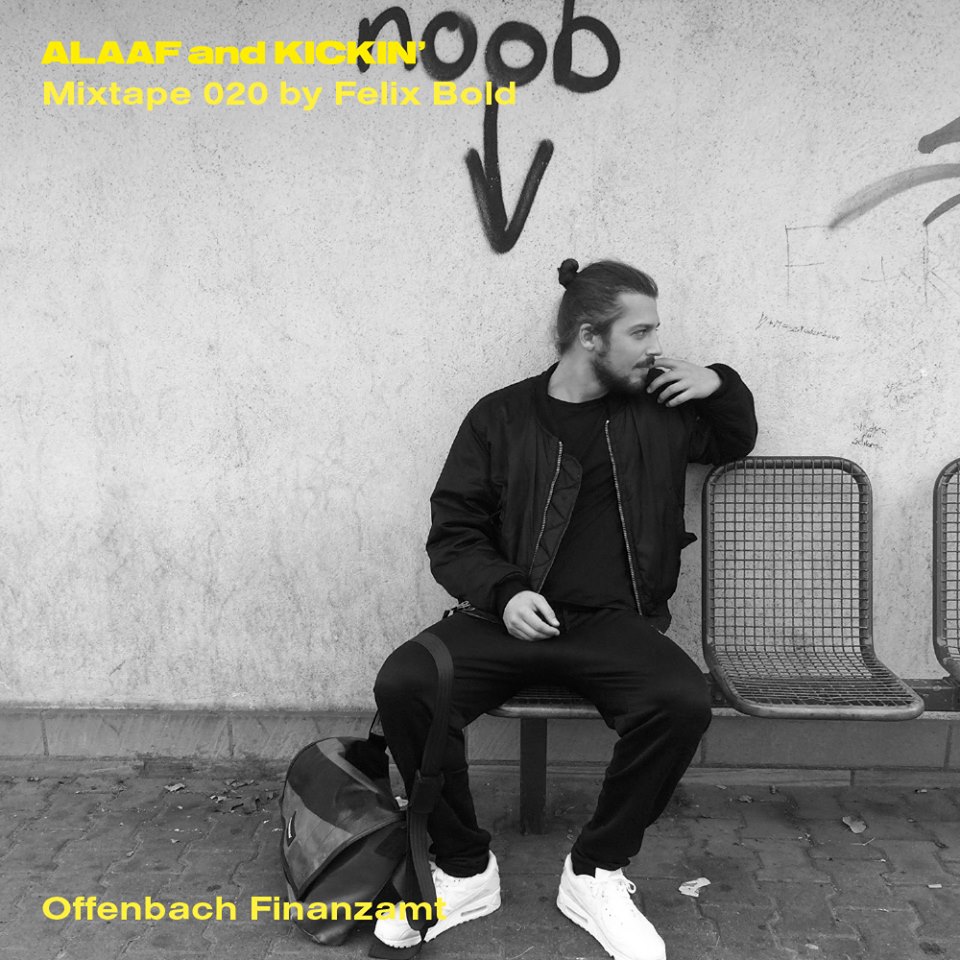 Although Felix Bold is one of ALAAF and KICKIN’s founders, things have become a little quite around him lately, since he recently moved to Offenbach to study acting at “HfMDK”. Only on special occasions, Felix packs his recordbag with pure goodness and heads back to his hometown Cologne. And obviously, he´s still got it!  If you’ve been around at our first ALAAF and KICKIN’ Sunday Groove this year, you know what we’re talking about.
After 8 months of waiting, he is now back with a wonderful new mixtape! Shakespeare and Tschechow are fine, but right here Felix will keep it hardcore with straight forward beats, heavy bass lines, soulful chords and beautiful vocals – briefly: House-music!

What was your initial idea or roadmap for the mix?
I wanted to create a Mix that is nice to listen to in various Situations. I imagine people listening to it on their earphones in the train, alone at home while doing other stuff, or with friends while chatting and drinking before a Party etc.. In the best case, this mix should make you wanna dance or just move some body parts – or at least snap a finger (depends on where you are).

Can you tell us something more about certain tracks you selected?
Every Track has a little story behind it. Some of them I bought at the beginning when I started to buy records, like The Rick Wade Song – „Can you feel it“ or „the Warning“ by Logic. The last track, I bought a couple of weeks ago on a fleemarket in Frankfurt and the track „No parking (on the Dancefloor)“ I recently discovered in the record shop next to my flat in Offenbach.
The track Process by Portable i dedicate to my roommate and good friend David who is a big fan and always happens to be in the first row when Portable is playing.

You´ve been fortuned enough to become a student at the „HfMDK Frankfurt am Main“ last summer and therefore you had to give up parts of your personel interests such as digging for records and beeing a DJ. How do you feel about that?
At the beginning of my acting studies there was no question about it because I just didn’t have the time and money to even think of djing. I couldnt focus on anything else than my studies . But now that I’m in my second year I’m getting more and more used to the requirements of it and so I have more space for myself . Thats nice because I really started to miss listening to new Records or djing with my boys in Cologne. Now it’s more a question of money. But which student doesn’t know that?

How is living in Offenbach? As a fulltime actor do you still have time to go out once in a while?
In my first year in Offenbach/Frankfurt we (me and my fellow students) used to drink and dance at privat partys or at the famous „Trinkhallen“. They also have nice radio-stations or cheesy Best of compilations. But of course I went to the Robert Johnson Club a couple of times. I mean, that club is always worth the journey.

It’s been 8 months since your last mixtape for Alaaf and Kickin’. Would you say that your musical taste has changed in anyway since then? Is there something new you have discovered for yourself?
Definetly! I think my taste is always changing because of the new artists I get to know and the new musical experiences I make. And I don’t mean just electronical music. Going to Dimensions Festival this year gave me the opportunity to discover a lot of amazing artists, that were completely new for me. I love that!
For example Max Graef, who is as well feautered in this Mix, I disvovered through my friends from Aroma Pitch who invited him to their monthly Cologne Sessions.